He was also a supporter of local causes: he was a major contributor to the costs of building St John’s Church, Woodley, and in his will he left funds to set up the Robert Palmer Almshouse Charity in Sonning. His portrait was commissioned for the Assize Court in Reading to mark his retirement as an MP after thirty-four years service and as a testimony to the estimation in which he was held by all. It was paid for by public subscription.

Eden Upton Eddis (1812-1901) exhibited regularly at the Royal Academy between 1837 and 1881. He painted a number of portraits of well-known figures, including Lord Macaulay, Archbishop Sumner and Sydney Smith. 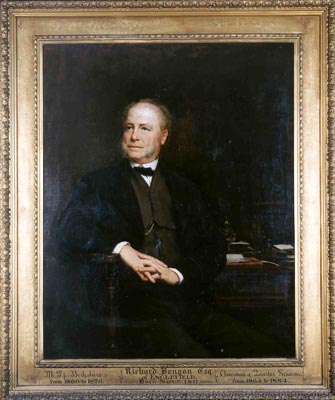 Richard Benyon inherited Englefield House and estate from his uncle, Richard Benyon de Beauvoir, in 1854. He was MP for Berkshire, 1860-1876, High Sheriff of the County in 1857, and Chairman of Quarter Sessions, 1864-1884. He was a noted philanthropist and built or rebuilt several churches on his Berkshire estates.

On his retirement as Chairman of Quarter Sessions a subscription was raised to pay for a portrait. The subscribers, led by Lord Barrington, presented the portrait to the County with the request that it ‘should evermore be carefully preserved by the County as a token of the deep sense entertained by them of the many merits of one whose name may with justice be enrolled among the great Berkshire worthies’. At a meeting of Quarter Sessions on 18 October 1886 the Court accepted the portrait, ‘highly appreciating it as an excellent specimen of the painter’s art and faithfully representing one very highly and deservedly esteemed throughout the County.’

Walter William Ouless (1848-1933) was recognised as ‘one of the most trustworthy portrait painters of the day’. His sitters included many leading figures of Victorian and Edwardian England, among them Charles Darwin, Cardinal Newman, Edward VII and Thomas Hardy. 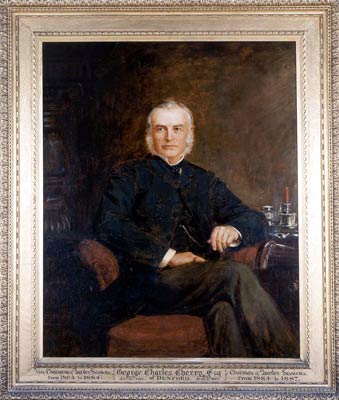 George Charles Cherry of Denford was the son of George Henry Cherry, who had purchased the Denford estate in 1820. He inherited the estate from his father in 1848. He was made a Justice of the Peace (JP) in 1853, and succeeded Richard Benyon as Chairman of Quarter Sessions in 1884, dying in office only three years later at the comparatively young age of 65. This portrait was painted after a photograph.

Cherry seems to have been well regarded by his contemporaries, who readily contributed to a subscription for his portrait. The portrait was presented in April 1888 to hang in the Grand Jury Room at the Reading Assize Courts. In receiving it, the county magistrates resolved, in the words of Richard Benyon, that ‘this court gladly and gratefully accepts from the subscribers the portrait of the late Mr Cherry ... and rejoices that it will have so satisfactory a memorial of its late chairman as part of the property of the County.’ 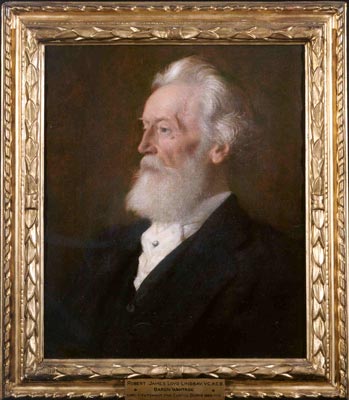 Portrait of Lord Wantage of Lockinge

Robert James (Loyd) Lindsay was born in Scotland, the son of General James Lindsay of Balcarres, Fifeshire. After a distinguished military career (during which he won the Victoria Cross at Crimea) he married, in 1858, Harriet Sarah Loyd, daughter of the banker Lord Overstone, taking the additional surname of Loyd. In the same year he moved to Berkshire, having been given the Lockinge Estate near Wantage by his father-in-law.

He took an active part in County life, becoming a magistrate in 1859, serving as MP for Berkshire, 1865-1885, Colonel Commandant of the Berkshire Regiment of Volunteers, 1872-1895, and President of Reading University College, 1892-1901. He was created Baron Wantage of Lockinge in 1885 and from 1886 until his death he was Lord Lieutenant of Berkshire.

Sir William Blake Richmond (1842-1921) was a versatile artist who included portrait painting among his many accomplishments. His sitters included Charles Darwin, Gladstone, Robert Browning and Bismarck. He was Slade Professor of Fine Art at Oxford, 1879-1883. This portrait was painted at Lockinge in 1899 and exhibited in London the following year. It was presented to the County in 1938 by Lord Wantage’s cousin and heir, Arthur Thomas Loyd, who was himself Lord Lieutenant of Berkshire, 1935-1944. 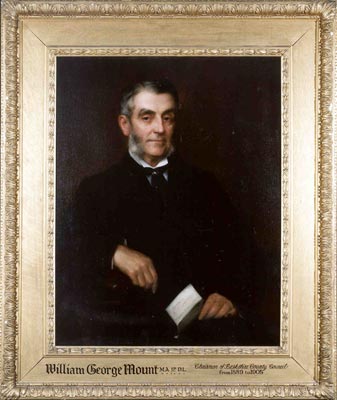 Mr Mount was the great-great-grandfather of Prime Minister David Cameron MP on his mother's side.

Georgina Brackenbury (1865-1949) was active as a society portrait painter in the late nineteenth and early twentieth centuries. She exhibited at the Royal Society of Portrait Painters and at the Royal Academy, 1889-1907. 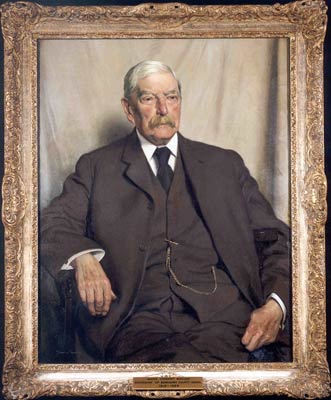 James Herbert Benyon was the nephew of Richard Benyon MP (see image 2 for his portrait) and succeeded his uncle to the Englefield estate in 1897. He was Lord-Lieutenant of Berkshire, 1901-1935, first Chairman of the Berkshire Education Committee from 1902, Chairman of Berkshire County Council, 1916-1926, and the first Chancellor of the University of Reading after it gained its charter in 1926. He trained as a lawyer. Though he could be taciturn he was remembered both at Shire Hall and at the University for his sense of humour and his hearty laugh.

James Gunn (1893-1964) was one of the leading portrait painters of his day. His portraits have been described as ‘severe ... in expression, painted with scrupulous distinction.’ His sitters included members of the royal family and many leading public figures. He was elected President of the Royal Society of Portrait Painters in 1953.