A Melody for St Patrick's Day 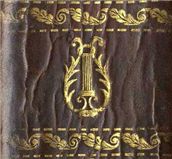 Stephen Mundy was a tenant farmer on Kennington Farm, in Kennington in the Victorian period. Amongst the records relating to the farm is a small bound volume of music. It contains a personal collection of Mundy's favourite folk and popular songs and tunes. One song featured and shown below, is entitled 'St Patrick's Day'. It appears to be a melody which may have been played on the fiddle or with a pipe instrument. A search of folkloric tunes online suggests that it is based on one entitled 'St Patrick's Day in the Morning' sometimes called 'Barbary Bells'.

St Patrick's Day falls on 17th March and was made an official feast day in Ireland in the seventeenth century in honour of St Patrick who brought Christianity to Ireland. Over time it has become a celebration of Ireland and Irish culture. The Victorians would almost certainly have indulged in the feasting part of the day which apparently involved corned beef and cabbage. Mundy's song book suggests that the Victorians would have also enjoyed a merry little tune. Perhaps those of us who are musically inclined could give it a try this St Patrick's Day.