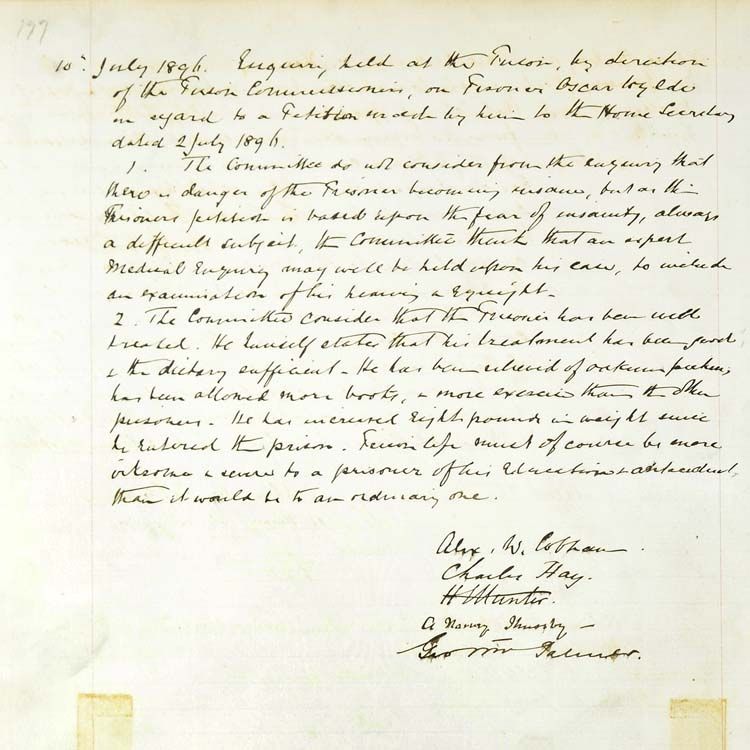 In July 1896, the Prison Commissioners instructed the Berkshire justices to investigate Wilde's mental and physical state. This was in response to Wilde's petition to have his sentence reduced on health grounds.

The justices used one of their regular visiting committee meetings to interview Wilde. They did not dismiss his concerns, but equally they did not view his situation as worse than that of his fellow prisoners. Their conclusion was that "Prison life must of course be more irksome and severe for a prisoner of his education and antecedent than it would be for an ordinary one." Nevertheless, they recognised that he was experiencing problems with his hearing; a debility acquired in Wandsworth Gaol and one that would hasten Wilde's demise.

The visiting committee was predominantly members of the Berkshire gentry. It was their task to maintain the gaol, appoint the staff, to sanction punishments for prisoners, and to see that those suffering from mental illness were transferred to the county asylum. Their chair, Captain Alexander Cobham, lived at Shinfield Manor; George Palmer was a member of the biscuit-making family.