The villain in our Berkshire midst

The writings of Charles Dickens contain some of the most well-known characters of Victorian literature, such as David Copperfield, Ebenezer Scrooge and Oliver Twist. Every good story needs a villain and Dickens’ work is no exception. 7th February 2022 marked the 210th birthday of Charles Dickens, so it seemed appropriate to highlight the Berkshire link with one of Dickens’ most notorious villains.

We hold a copy of a marriage settlement between Henrietta Villebois and Sir Francis Sykes made in 1821 (shown below; catalogue reference D/EX2717/1/3/23/1). Marriage settlements were commonly used from the sixteenth to the nineteenth centuries. They were a way of settling key questions, such as the maintenance of the wife and future children. It was these settlements that frequently entailed estates to eldest sons, making it impossible to sell estates without an Act of Parliament, if the heir was not of age.

Along with the Gillingham Estate, Dorset, Sir Francis Sykes, 3rd baronet, also inherited ‘the Manor and Lordship of Baseldon otherwise Bastledon otherwise Bassingdon and all and singular other the manors rectory advowson messuages lands tenement and hereditament in the said County of Berks’. 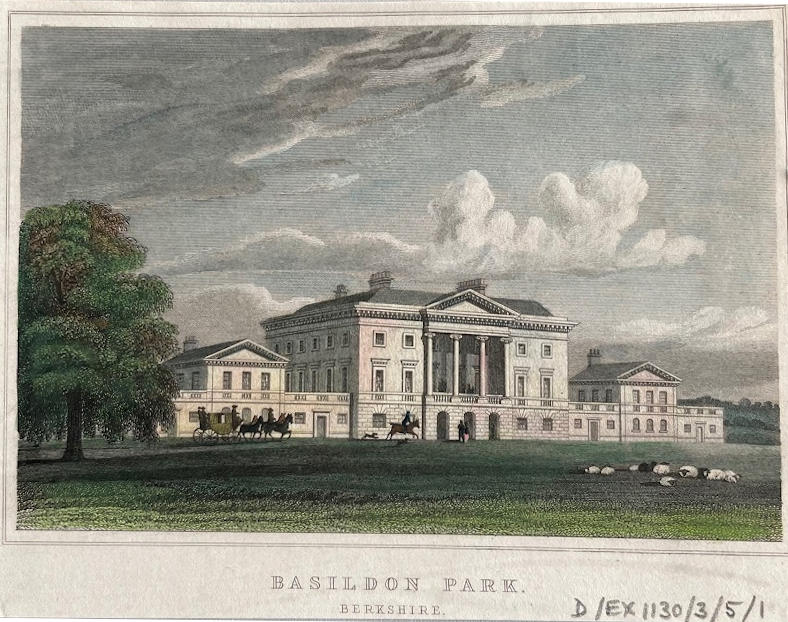 Money continued to be an issue for Sir Francis Sykes, so it is unsurprising that when he came to look for a wife, it was a factor taken into consideration. Henrietta Villebois was the daughter of ‘Henry Villebois of Gloster Place in the Parish of Saint Mary le bone in the County of Middlesex Esquire’. The Villebois family had their county seat in Marham, Norfolk and had attained their wealth by marrying into the Truman Brewery in a previous generation.

The intended marriage did produce issue with the couple having four children: Francis-William, Frederic-Henry, Henry and Eva-Maria. However, it was not a love match, with both being known to partake in affairs. Henrietta’s affair with the future Prime Minister, Benjamin Disraeli, was immortalised in his novel Henrietta Temple, about a secret love affair with a married woman.

Another of Henrietta’s affairs was with the painter, Daniel Maclise, a friend of Charles Dickens. Sir Francis publicly denounced his wife over this affair in a notice in the newspaper:

‘WHEREAS, HENRIETTA SYKES, the Wife of me, Sir FRANCIS SYKES, Baronet, hath committed ADULTERY with DANIEL McCLISE, of Russell-place, Fitzroy square, Portrait and Picture-painter (with whom she was found in bed at my house, No. 20, Park-lane, in the parish of St. George, Hanover-square, in the county of Middlesex, on the 4th day of July, 1837) -

This is to give Notice, that hereafter I shall not be ANSWERABLE for any DEBTS she may contract, or for GOODS which may be supplied to her.

This scandal ruined Lady Sykes’ reputation and harmed Mr Maclise’s business. However, insulting a friend of one of the most popular authors of the day did not turn out well for Sir Francis. Even changing a letter in the name was not enough to disguise the fact that one Bill Sikes of Oliver Twist was most likely inspired by Sir Francis Sykes.