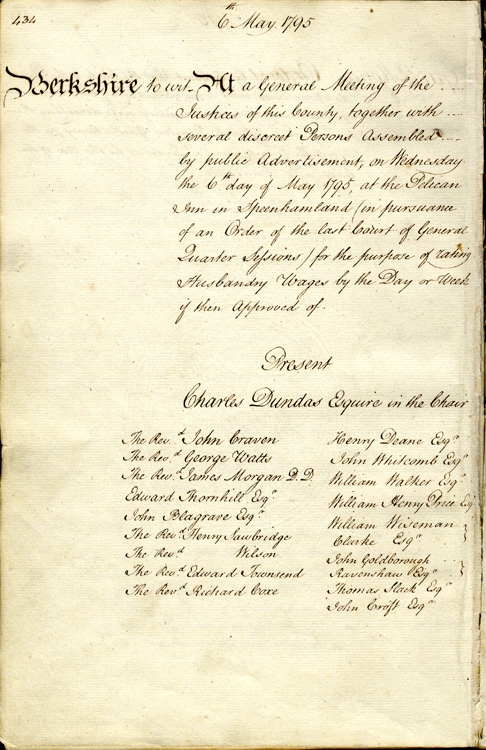 On 6 May 1795, the Berkshire Court of Quarter Sessions held a special meeting at The Pelican Inn in Speenhamland, near Newbury. Here is the first page of that meeting.

The object of the meeting was to approve a minimum income for agricultural labourers. The justices sitting in Sessions agreed a scale of credits to top up wages during a time of high inflation. These top-up payments would be paid for out of the rates.

The system was similar to many modern tax and welfare systems. Payments were based on how many children a family had. This in turn was linked to the price of bread, which acted as a wage stabiliser.

Speenhamland was one of many similar systems in use throughout England, but has become the best known. The use of it and other bread scales for poor relief was abolished by the Poor Law Amendment Act 1834, which introduced the workhouse system.

The system has caused much debate since its abolition. At the time, right wing commentators lamented its validation of the poor, believing that it would stifle innovation in agriculture, and also encourage the labouring classes to breed. The left resented the fact that it effectively provided a subsidy for rich farmers, who were free to profit from inflation in goods without passing on increases in wages. It seems unlikely that the justices of Berkshire were aware how much controversy they were creating when their horses stopped outside The Pelican Inn on that spring day, over two hundred years ago.