Founding year of the Reading-Düsseldorf Association

On Friday 30 May 1947, the Reading Standard reported that the Mayor of Reading, Mrs. Phoebe Cusden, had launched a scheme “to establish friendly relations” between Reading and Düsseldorf. This was the beginning of what would become the Reading-Düsseldorf Association. She is reported to have been enthusiastically supported by several officials including the Minister in Charge of German Affairs, Lord Pakenham, and the Regional Commissioner of North Rhineland and Westphalia, Mr. W. Asbury.

The Mayor had interest from other locations in Germany as this letter from the town of Rheydt shows. However, by then relations with Düsseldorf had already begun and this is the town that was chosen as the one to be twinned with. 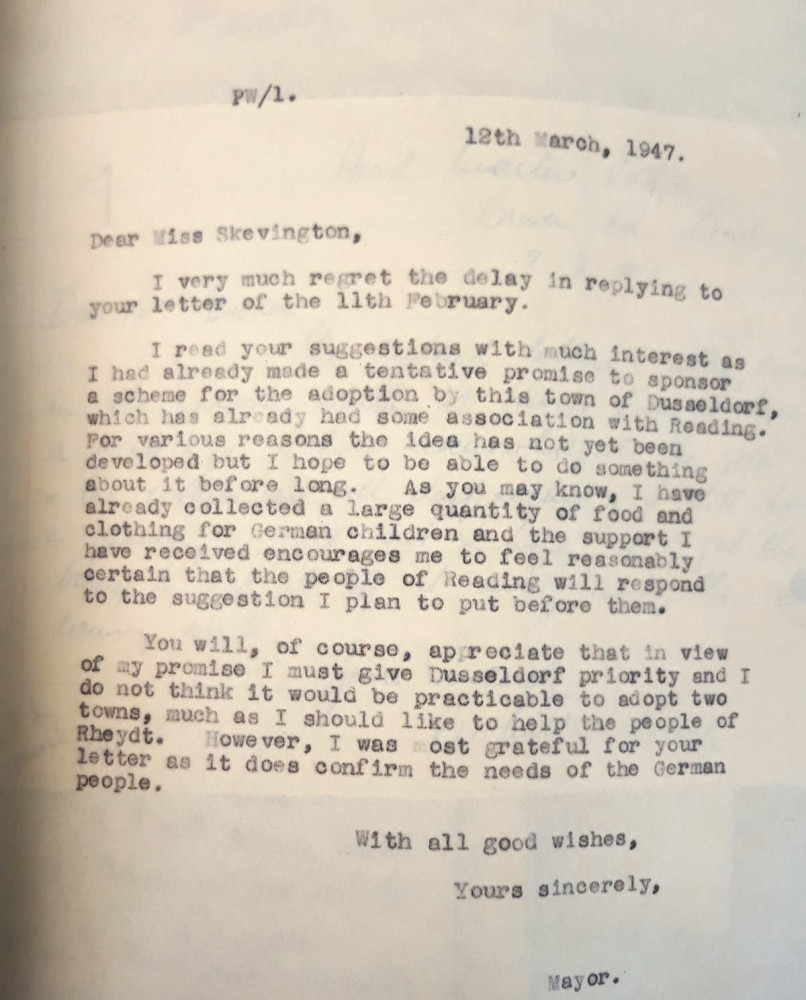 Mrs. Cusden referred to her scheme as a “goodwill mission” and explained that she wanted “to get representative sections of Reading to enter into friendly correspondence with their opposite numbers in Germany”. During the Winter prior to this announcement, she had organised a collection for food and clothing to be sent to German children and seemed keen to continue this kind of philanthropic endeavour in order to foster a sense of goodwill and support between the two towns. This image shows how grateful she was as she wrote to the local paper to express her gratitude to those who had made donations. 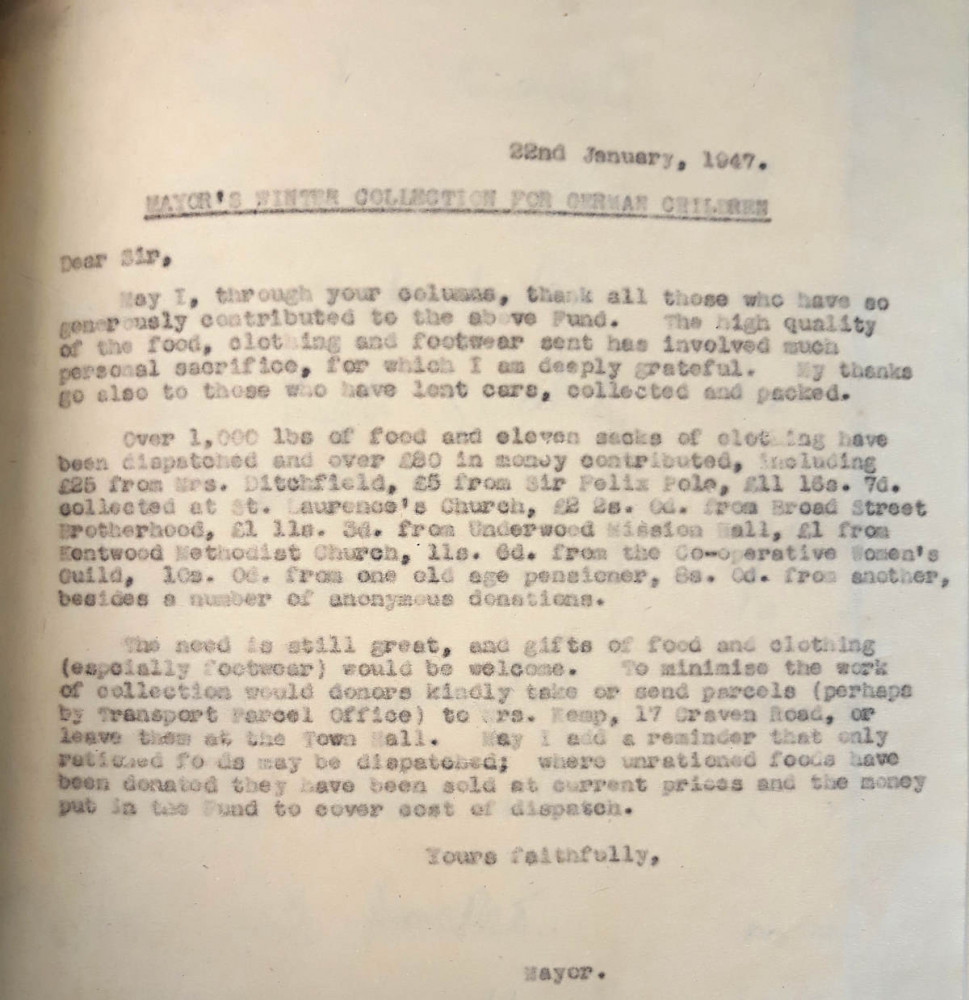 Mrs. Cusden also took this opportunity to respond to criticism of the international support scheme and dismissed them, choosing instead to encourage world politicians to meet “the elementary human needs of the peoples of Europe”. Overall, the scheme seemed to have significant backing from several influential persons and groups including the Bishop of Reading, the President of the Free Church Council, and the member of the Reading Trades Council.

About a month later, the Reading Standard reported on the response to the mayor’s scheme from the Tilehurst Parochial Church Council. They appear to have been very much in favour of the idea of establishing relations between the two towns and gave their support to the repatriation of German prisoners-of-war, something that Mrs. Cusden would later advocate for.

An instance of first contact between organisations under the scheme was reported on in the 19 September 1947 edition of the Reading Standard:

‘On Sunday, at the invitation of the Mayor, two vice-presidents and the hon. secretary of the Reading Business and Professional Women’s Club – respectively Miss Smythe, Miss Brooker and Mrs. Abraham – with Mrs. Kirkpatrick, the international chairman of the B.P.W. clubs, met Frau Tholan Johan, founder of the Dusseldorf Business and Professional Women’s Club, and Fraulein Schaefer, leader of the Catholic Women in Düsseldorf.’

All the women took tea at the mayor’s home and Mrs. Cusden was optimistic that the friendly relations established would be continued. The two ladies from Germany were on a course in Beaconsfield on English Local Government, something that seems to have occurred relatively frequently.

Similarly to Frau Tholan Johan and Fraulein Schaefer, the Town Clerk of Düsseldorf visited Reading in late November 1947 to study the workings of local government. Dr. Walther Hensel was visiting various towns in England and when in Reading he was interviewed at Mrs. Cusden’s residence. Dr. Hensel used this opportunity to ‘plea for more sympathy and understanding for the men trying to govern Germany to-day’.

Also in 1947, Mrs. Cusden and her husband, Mr. Albert Cusden, took a trip to Düsseldorf and below is an itinerary of their visit. Their experiences were described in the Reading Standard on 24 October 1947. Mrs. Cusden appeared particularly struck by the conditions that some of the German people were living in, with families residing in bunkers or basements. She continued to say that ‘in order to get some children away from those living conditions she was in touch with the Foreign Office in the hope that they would allow people in Reading to take children into their homes for a while’. Heart-warmingly, she was also able to report that she had already had multiple offers of hospitality. This idea would come to fruition and was reported on in both English and German newspapers. 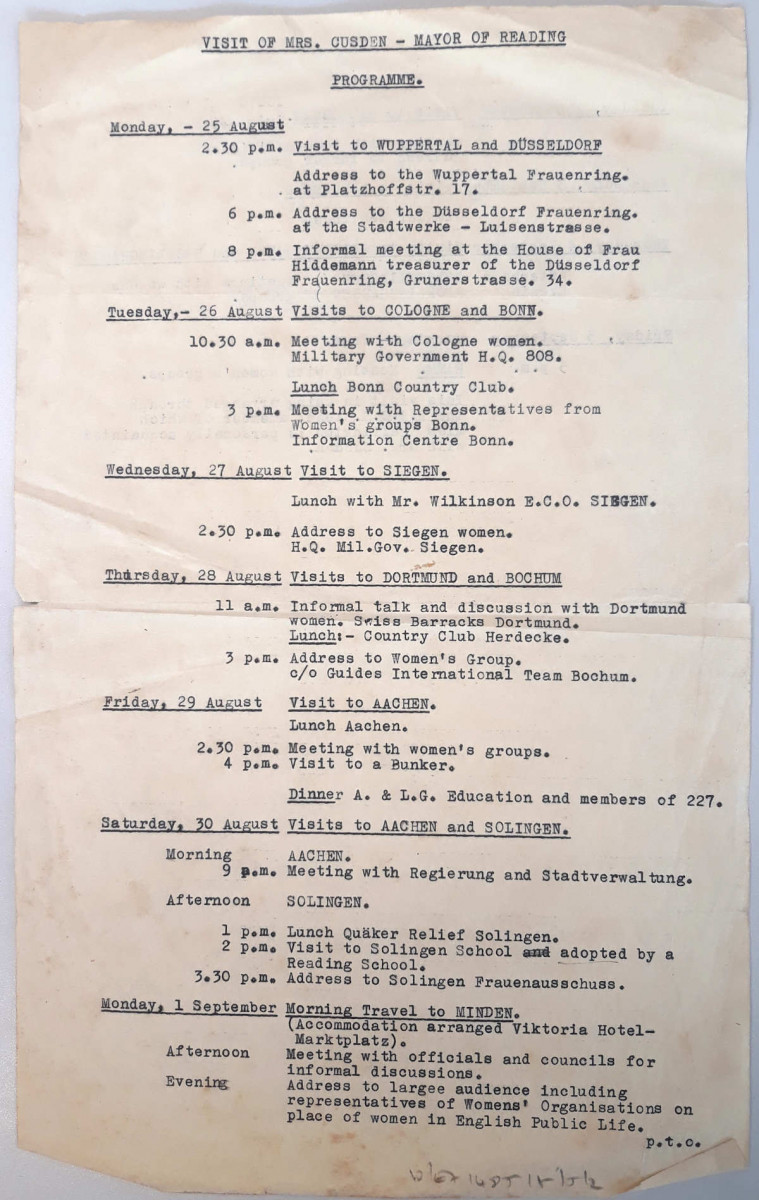 Mrs. Cusden closed her report with an appeal ‘for the development of more friendly relations with the Germans’, describing it as “absolutely essential”. An official twinning between the towns took place in the latter part of the 20th century and with the Reading-Düsseldorf Association celebrating its 75th anniversary in 2022, it seems safe to suggest that the friendly relations Mrs. Cusden hoped for have been achieved.

The papers of Phoebe and Albert Cusden (D/EX1485) can be viewed at the Berkshire Record Office. Those of the Reading-Düsseldorf Association are currently being catalogued under the reference D/EX653 and will be available soon. If you would like to find out more about the RDA, please see their website.

The RDA has partnered with Reading Museum to put on a free exhibition about the friendship between Düsseldorf and Reading to celebrate the 75th anniversary. Entitled "Head Over Heels: Friendship from the ruins", the exhibition will have photographs, artefacts and a selection of records from the RDA archive on display. It will also look at the Reading sculpture Cartwheeling Boys, a symbol of the ongoing cultural exchange between the twinned towns. The exhibition starts on 18th June 2022. See the Reading Museum website for details.