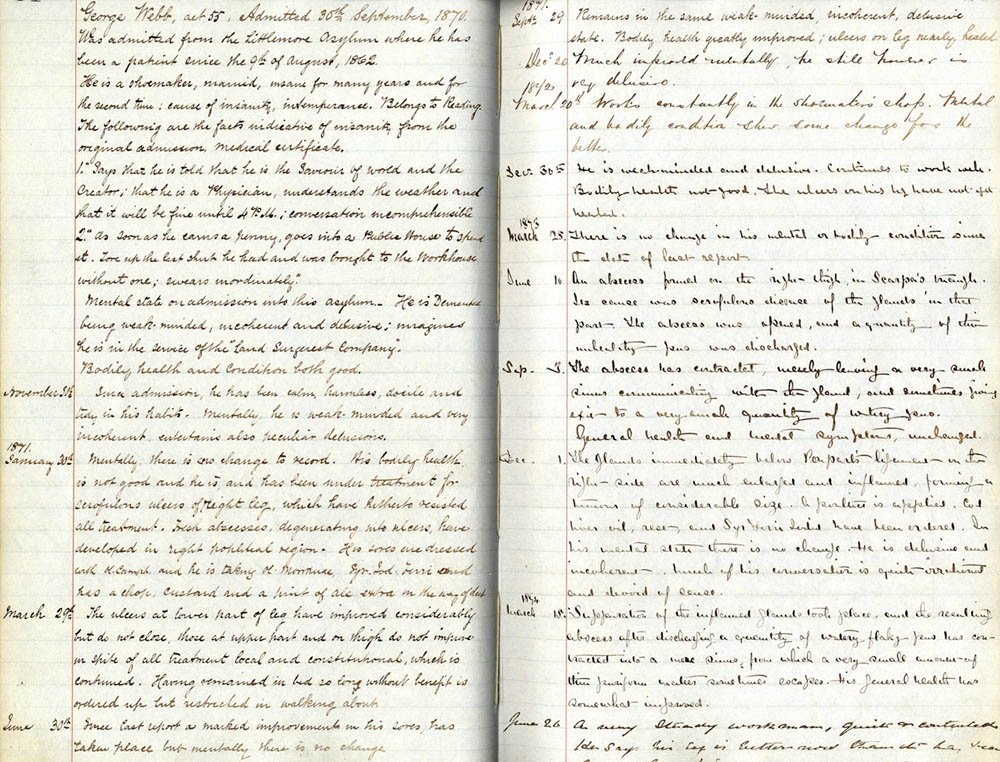 George Webb was admitted to Fair Mile on 30 September 1870. He was one of the first group of patients to be transferred from Littlemore Asylum in Oxford, where the Berkshire lunatics had previously been housed. He had been a patient there since 1862, having been previously a shoemaker in Reading. He was married, and 55 years old.

The cause of his insanity was supposedly his intemperance, as he spent everything he earned on alcohol. His admissions paper stated that 'he is told that he is the saviour of the world and the creator; that he is a physician, understands the weather, and that it will be fine until 4pm; conversation is incomprehensible.’ He was also prone to destroying his bedding.

He had ulcers on his legs, which were lanced and dressed, but these took a long time to heal and kept recurring on his legs and other parts of his body. These ulcers were caused by scrofula, a kind of tuberculosis affecting the lymph nodes. It is now rare in the developed world, except in people with reduced immunity. It can usually be successfully treated either with antibiotics or with surgery. Instead, George was treated with extra rations of meat, dairy products and beer to help build up his strength, as well as various medicines.

He continued in his delusions but was otherwise placid. He remained in the Asylum, working in the shoemaker’s workshop. In 1881, he developed an ulcer on his nose which gradually ate away at his face, causing him to lose most of his nose, his right eye, and part of his forehead, so that by April 1883 the medical officer wrote that ‘one side of his face is now a cavern.’ It was skin cancer. Apparently he suffered no pain, but he became weaker and eventually died in Fair Mile on 11 October 1883. 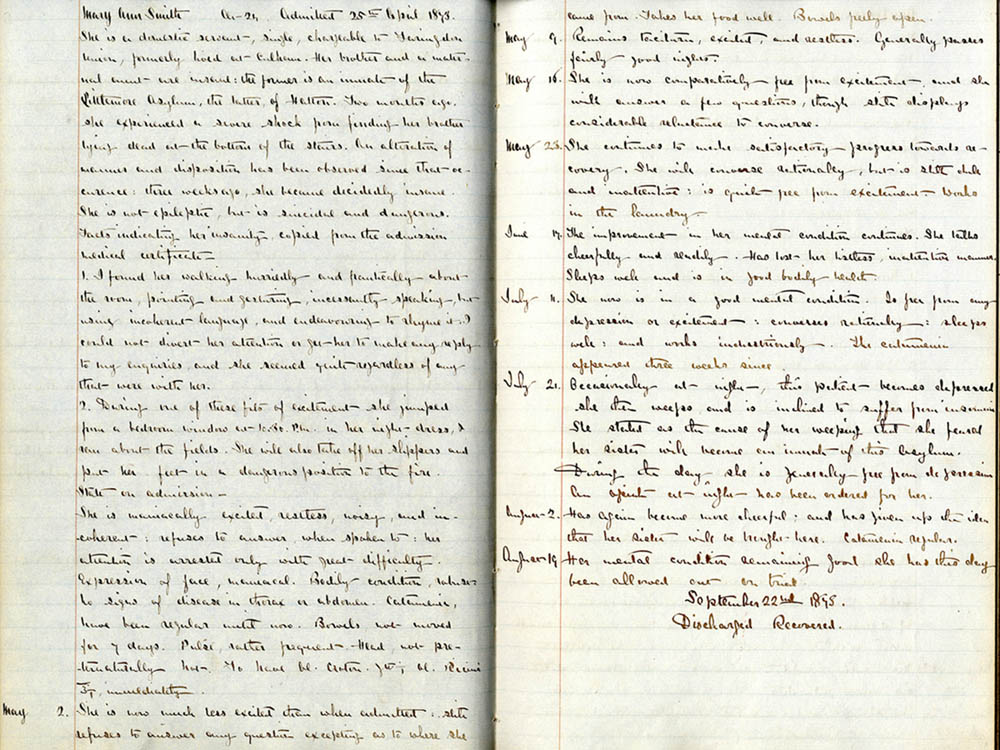 Mary Ann Smith, a domestic servant aged 24 from Faringdon, was admitted to Fair Mile on 28 April 1873 . Her family had found her pacing around her room, speaking continually and incoherently, trying to rhyme her words. She had recently jumped out of her window at night and run around the neighbouring fields.

The cause was considered to be shock: two months before, she had found her brother lying dead at the bottom of the stairs. Evidence had also been found of hereditary insanity, in that her brother and aunt were currently patients at asylums. The Victorians set great store by such factors.

Within a fortnight of her admission, she had calmed down appreciably. Although she continued to cry at night, she was allowed out on trial in August and discharged completely on 22 September 1873. 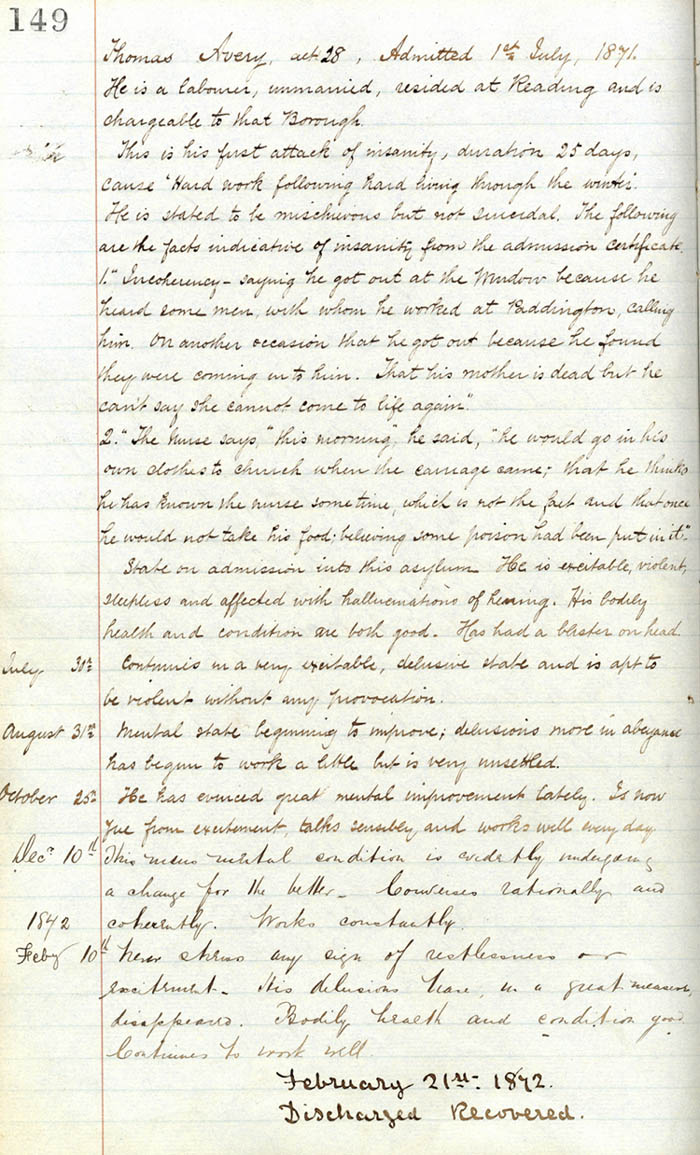 Thomas Avery, a 28-year-old unmarried labourer from Reading, was admitted on 1 July 1871 suffering from the effects of hard work.

Thomas had experienced a difficult winter during 1870/1, probably without work, possibly sleeping rough or in unsatisfactory accommodation. In the spring, he had found work again - possibly on the railways - and driven himself until he collapsed towards the start of June. He was acting incoherently, believing that he heard or saw people he knew, and mistaking strangers for old acquaintances. He also stated that his dead mother might come to life again. In common with many delusional patients, he also refused to eat, believing that his food was poisoned.

After two months of relative inactivity, he began to work again in the Asylum. His industry continued until he was working every day, and also behaving rationally. He was discharged recovered on 21 February 1872. 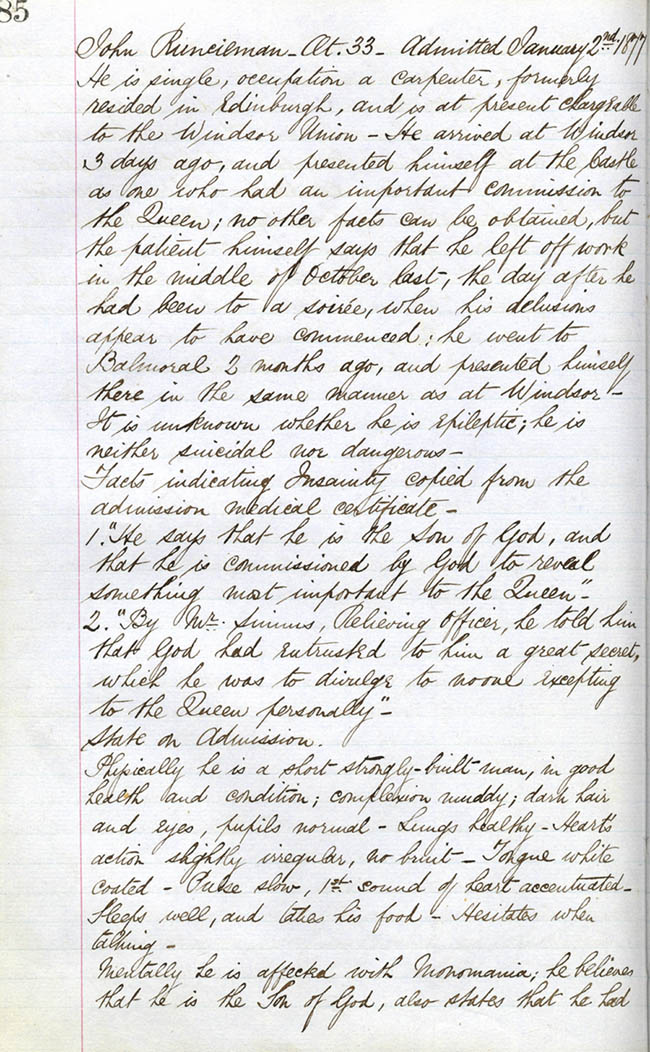 John Runcieman was a thirty-three year-old carpenter from Edinburgh, when in October 1876 he suddenly quit his work the day after attending a party. The suggestion is that something happened that night to bring on a particular delusion: that he must go to Balmoral and present an important message to the Queen. He was denied the opportunity to see the Queen, and sent home.

Three months later, on New Year's Day 1877, he travelled down to Windsor and walked up to the Castle. He made a similar statement, 'that he is the Son of God, and that he is commissioned by God to reveal something most important to the Queen.' He had committed no criminal act, and rather than arrest him, the Police took him off to the Windsor Workhouse where he was removed to Cholsey the next day.

His continued to hold onto his delusion while in Fair Mile. He was diagnosed with 'monomania', an obsession with a single subject. Otherwise, he was quiet, cheerful, and ate and slept well. When his friends back in Scotland discovered his situation, they arranged for him to be removed to an asylum closer to home. He left Berkshire on 18 June 1877. 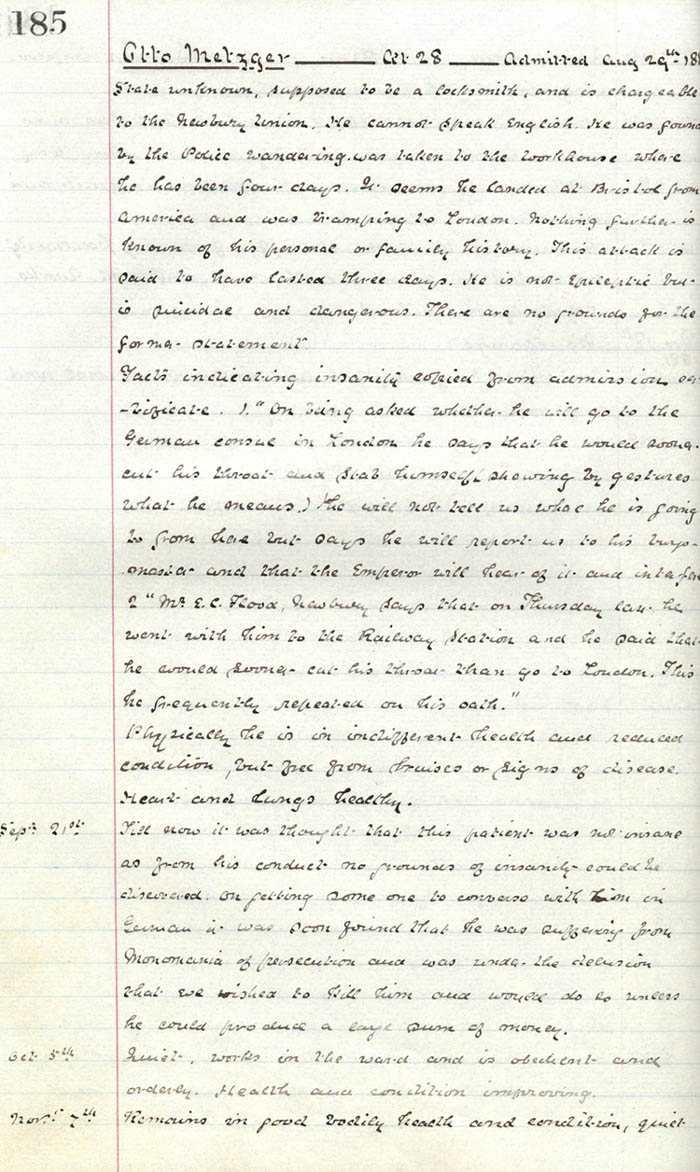 Otto Metzger was found wandering in Newbury by the Police and taken to the Workhouse as a tramp. He was German, aged 28 and a locksmith.

His case was a curious one. He stated that he had come by ship to Bristol from America, and was now en route to London. However, he spoke very little English, and the Police translators were unable to discover much about him. He was removed to Fair Mile because he became aggressive under questioning, threatening to cut his throat if he was sent to the German Consulate, and also to report the Workhouse Master to the German Emperor. He arrived in Cholsey on 29 August 1880.

Metzger was considered sane by the medical staff until they ascertained that he believed they intended to kill him. At that point, he was diagnosed with monomania, or an obsession of persecution. Despite this, it was soon apparent that Metzger was an industrious worker on the wards and an obedient and otherwise rational patient.

In October, Fair Mile made contact with the German Consulate in London. Funds were obtained to repatriate Metzger to Germany, and he was discharged to the Consulate's care on 28 December. He subsequently wrote to the asylum to let them know that he had arrived safely in Freiburg. 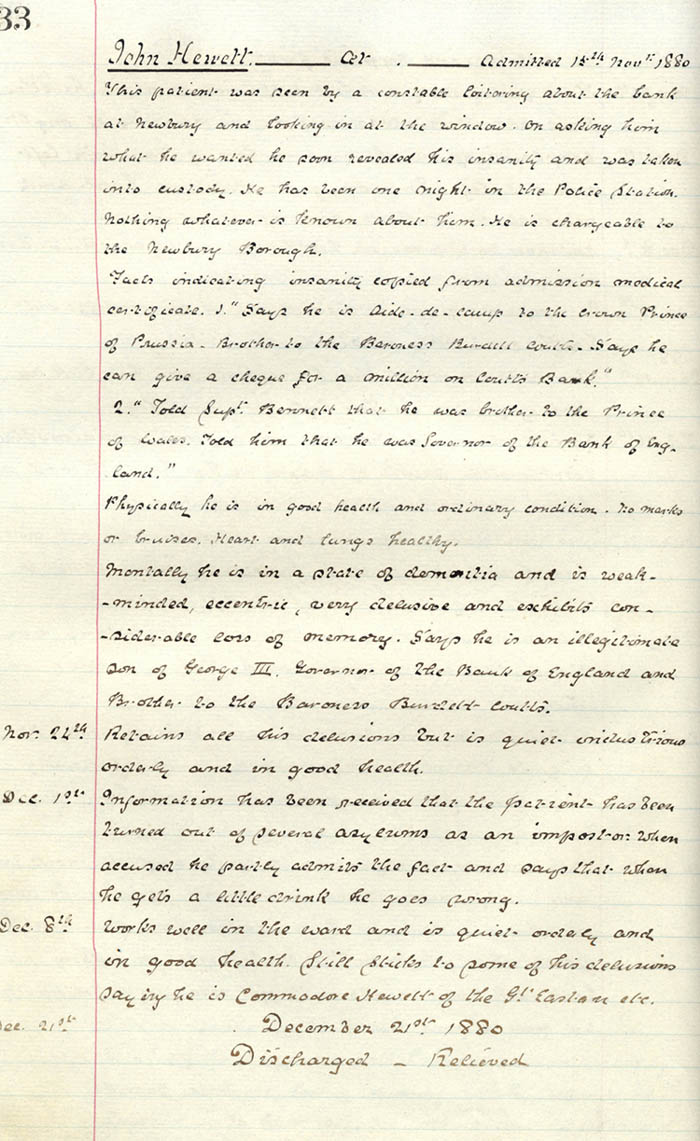 John Hewitt was admitted to Fair Mile on 15 November 1880, having been found loitering around the bank in Newbury by the Police. He was arrested, and taken to the local Station, where he told the Superintendent that he was employed by the Crown Prince of Prussia, a Prince of the Realm, and the Governor of the Bank of England. He also claimed to be the brother of Baronet Burdett-Coutts of Coutts Bank, and said that he could draw a cheque for a million pounds. In Fair Mile he also claimed to be the illegitimate son of George III. He was diagnosed with dementia, as having lost his mind.

However, within a fortnight information was received that he had previously been turned out of several asylums as an impostor. The accusation was put to him and he conceded it, excusing himself by saying ‘when I get a little drink I go wrong’. He was discharged on 21 December 1880. 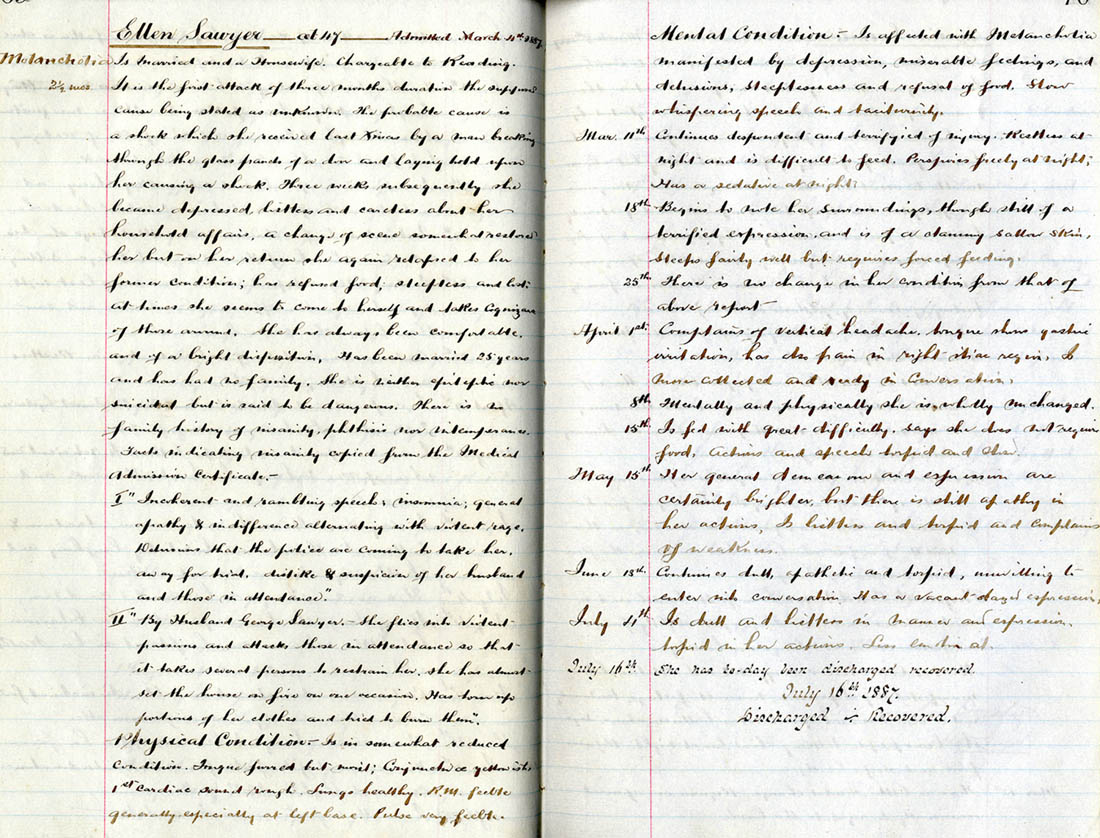 Forty-eight year-old Ellen Sawyer was a Reading housewife when a man broke into her home over Christmas 1886. He smashed a glass panel and grabbed hold of her.

The event seemed to cause a change in her. She became 'melancholic', or depressed, and took no interest in her home. Despite a trip away to see family, her symptoms did not improve, and she refused to eat or sleep. She became violent, attempting to burn down the house and attacking her husband. She was admitted to Fair Mile in March 1887.

She was given sedatives at night and also force fed. This level of intervention did not appear to have any effect whatsoever, and her condition remained low and listless. Despite this, she was discharged recovered on 16 July 1887. The circumstances are not recorded, though her discharge may not have been on medical grounds. She had a long and settled marriage, and it is possible that her husband wished to have her back home, and that the authorities agreed to his request.