For the Welfare of the Insane Poor

For the Welfare of the Insane Poor 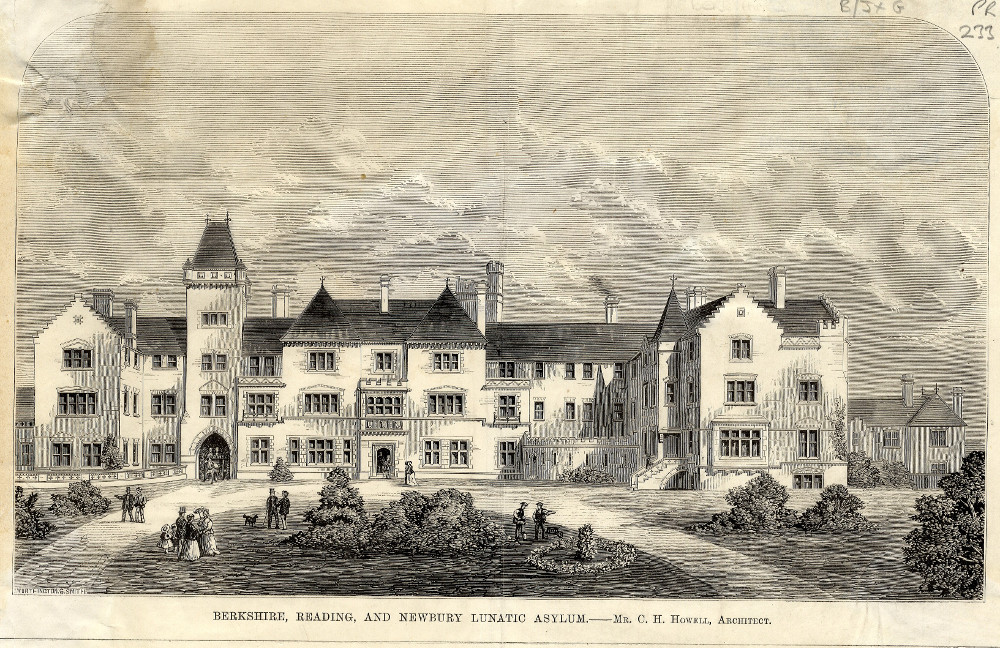 Fair Mile Hospital in Cholsey was opened in 1870 as the County Lunatic Asylum for Berkshire. It closed in 2003. Following the award of a grant from The Wellcome Trust, BRO has been able to make the Asylum's archive available for research. These pages provide an illustrated history of Fair Mile.

Mark Stevens' book about Fair Mile, Life in the Victorian Asylum, is now available from booksellers.

Until the late 18th century, mentally ill people in Britain were either cared for by the community, or treated in harsh conditions in prisons, workhouses, or private ‘madhouses’. Infamously, Bethlem Hospital in London, known as Bedlam, even charged spectators to visit its chained, naked inmates for public amusement.

Attitudes began to change during the reign of King George III. Not only did the King suffer from periods of mental illness, but he was also the victim of physical attacks from subjects who were obviously ill. All these events were eagerly reported by the developing press. Around the same time William Tuke, a Quaker, revolutionised care for the mentally ill by founding The Retreat in York. This institution was run under a system of ‘moral’ treatment, effectively a programme of humane care.

Although a series of legislative reforms followed, it was not until the County Asylums Act 1845 that all counties were compelled to make residential provision for the treatment of the mentally ill. This could be contracted out: the Berkshire justices, together with the Boroughs of Abingdon and Reading, made agreement with Oxfordshire in 1847 to use the latter's asylum at Littlemore rather than build their own. 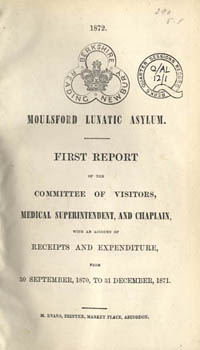 That agreement lasted until 1867, when it became apparent that an alternative solution was required. The lunatic population had grown, and Oxfordshire could no longer accommodate its neighbours' cohort. Berkshire, Reading and Newbury Borough made a new agreement to build and share an asylum. Land was purchased in Cholsey, and Fair Mile opened in September 1870. At the time, it was called 'the Moulsford Asylum', due to its proximity to what was then known as Moulsford Railway Station.

Photograph of the interior of a ward. (Courtesy of Judy & Stuart Dewey of Pie Powder Press. Most photographs credited to them are from their book "Change at Cholsey - Again" available from www.piepowder.co.uk)

The first phase of the new Berkshire Asylum was designed to accommodate 285 patients, rising to 500 when the initial plans were completed. During 1870-1871, around 280 patients were transferred to Fair Mile from both Littlemore and other asylums. Fair Mile was extended in 1880 to 609 beds, and again in 1901 to 800 beds. These patients were mostly 'paupers', that is their care was provided at the expense of local ratepayers. However, the asylum also admitted fee-paying private patients if there was capacity to do so. 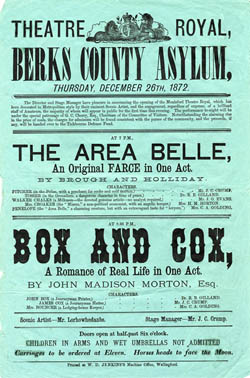 The asylum was almost a self-sufficient community with its own bakery, laundry, farm and gardens. The Medical Superintendent was expected to act as senior physician and as chief executive, assisted by the support of an assistant doctor, nursing staff, and a wide range of auxiliary staff including a farm bailiff, an engineer, a baker, skilled and unskilled workmen, laundresses, servants and clerical staff. The ratio of nursing staff to patients was about 10:1.

The Victorian asylum also employed a chaplain and held regular services in its chapel. It had a library, and offered a varied programme of entertainments, such as sports, music, dances, and theatrical performances.

Photograph of the interior of the kitchen or laundry (courtesy of Judy & Stuart Dewey of Pie Powder Press).

Victorian asylums were not vast prisons where poor unfortunates were kept locked up for their entire lives. Many patients were discharged 'cured' to their friends or families, and the Victorians themselves were determined to make admission very difficult. Asylum care was a relatively expensive option, and as a result mentally ill people, particularly the elderly, might be just as likely to endure the spartan regime of the workhouse than be admitted to an asylum.

Nevertheless, Victorian asylums tended to expand. They did so because there was a lack of effective medical treatment for both mental illness and for physical illnesses with mental symptoms. Many of the patients would now be easily cured or not have fallen ill. For example, some of the female patients were admitted suffering from mental health problems as a side effect of post-natal infections caused by poor hygiene. There were also a large number of patients with tertiary syphilis, a sexually-transmitted disease that eventually affected the brain and nervous system, causing severe neurological problems. Tertiary syphilis became extremely rare once penicillin became generally available in the 1940s. 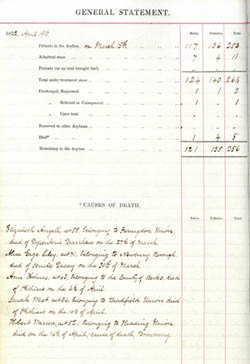 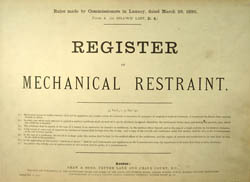 The Asylum’s treatment regime consisted of rest and routine. Patients were fed a nourishing diet, given fresh air and exercise, and kept occupied if possible with work and entertainments. Mechanical restraint - usually defined as a straitjacket, was seldom used, as the practice had begun to be challenged in the 1840s. Any use of restraint had to be recorded in a special register. In keeping with the concept of the Asylum as a refuge, the Victorians also believed that admission in itself was treatment, as it would remove a patient from the causes of insanity in their day-to-day lives, such as worry or emotional excitement.

There were very few medical interventions used, although both sedatives and purgatives were administered. Many of the patients were admitted with malnutrition or other physical debilities, and these were treated at the same time as a patient's mental health. The regime worked for a substantial proportion of patients: around a third of those admitted between 1870 and 1914 were discharged recovered.

Patients worked on the farm and in the gardens and laundry, and did cleaning, sewing, and shoemaking, which acted as early forms of occupational therapy. If their condition improved, they were gradually given greater freedoms, progressing from walking round the outside airing courts to going on supervised walks and outings.

Those patients who had recovered enough to go home were discharged on probation and given a monetary allowance so that they did not have to find work immediately. They were discharged after a month if they managed to cope in the outside world. 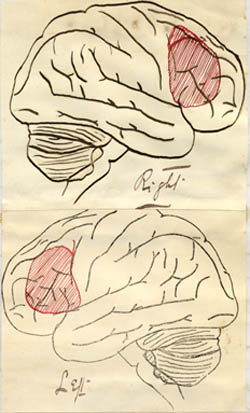 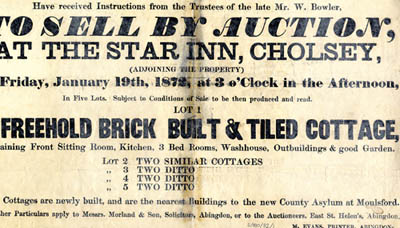 Most of Victorian Fair Mile’s staff lived on site or in purpose-built cottages nearby. In addition to their wages they received cooked meals, uniforms, board and lodgings, or an allowance of farm produce to take home. This paternalistic approach was not entirely selfless: their proximity allowed nursing staff to work from 6am to 8pm, six days a week, and from 6am to 6pm on Sundays. They had one day off a month from 10am, and were granted just one week’s annual holiday, on reduced pay.

Staff recruitment and retention was a continuous problem for the hospital, especially because of the long hours and demanding nature of the work. It was also expected that female staff would leave employment upon their marriage. Initially nursing staff did not need any qualifications, and there was no formal training scheme in place until the 20th century. During World War 2, the hospital began to recruit a large proportion of its nursing staff from abroad, either from Europe or from Commonwealth countries, a national trend in nursing that continues to this day. 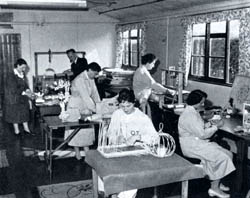 In 1948 Fair Mile became part of the NHS. It ceased to be known as an asylum or a mental hospital. It was joined with Borocourt and other, smaller residential homes as part of a group of service points delivering care.

This period coincided with dramatic improvements in pharmaceutical and psychological treatments for mental illness. With the introduction of the NHS and the modern welfare state, together with the post-war economic boom, standards of living and general health also began to rise. 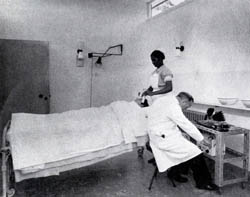 During the 1980s, social policy moved away from the provision of large-scale residential care and towards what became known as ‘care in the community’. This emphasised either out-patient care or smaller residential units. In 1993 Borocourt was closed, and Fair Mile followed in 2003. In-patient care was moved to the newly-built Prospect Park Hospital in Reading. 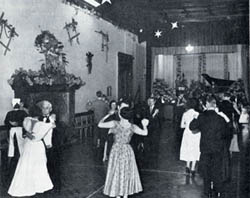