What was that name?! 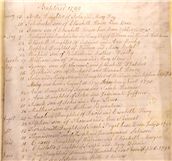 In a Harwell parish register (ref. D/P64/1/2), a baptism entry has recently been discovered which may cause a bit of stir as the name is a little risqué. The name in question is Cexcee.

Cexcee was baptised on 10 November 1799 and was the second child of William and Elizabeth Morgan who were married in Harwell in 1797. They had ten children altogether; seven were baptised in Harwell, three in Lichfield, Staffordshire. The other children's names are fairly common and what you might expect for the period: Susannah, James, George, John, Louisa, Sarah, Thomas and Sophia. Theophilus is probably the most extraordinary of the lot - until you include Cexcee that is.

It is an unusual name not least for its apparent 'sexual' connotation. But realistically it was probably a variation for something like Cecilia. As her name is spelt throughout her life as Cexcee, sometimes Sexcey, it could not be that every vicar or official misheard the name and wrote it down incorrectly. It must really have been her name and an unusual one at that. Certainly the name does not seem to appear elsewhere so it really does seem to be unique.

Cexcee goes on to marry James Giles in Lichfield in 1836. The 1841 census reveals that she is living there with their children, Mary, Fanny, Emma and James. In 1851 the couple and two of their children emigrated to America sailing on the Michael Angelo from Liverpool to Philadelphia. The 1860 US census reveals that Sexcey (as she is listed) and James are living with one of their daughters, Emma, her husband William Robinson and their four children. Cexcee certainly settled in America for the long term as she died in Philadelphia in 1883 - taking her unusual name with her.