Across the Thames at Pangbourne

This month sees the re-opening of the Whitchurch Toll Bridge after a year’s closure for reconstruction. Crossing the Thames at Pangbourne, Whitchurch is the only road bridge between Caversham and Goring, making it a well-known part of West Berkshire life.

The current iron bridge was originally built in a few months during the winter of 1901-1902. It replaced an earlier wooden bridge, which itself replaced the first crossing, constructed in 1792 after the Whitchurch Bridge Company was created by Act of Parliament. Before that, the residents of Pangbourne and Whitchurch were transported across the Thames by ferry.

The photograph we have here shows the second wooden bridge – built in 1852 – that was replaced by the present one. The image comes from a book which belonged to the Hope Family of Stanton Hall in Lancashire (D/EX 686/1). They probably stayed at Whitchurch House around 1865-1866 and their record of that visit includes some of the earliest known photographs of Whitchurch, Pangbourne and the surrounding area.

This photograph was probably taken in August 1866 and shows the Forbes family of Whitchurch on a family outing to Pangbourne Meadow. The three eldest girls are Elizabeth, Lillias and Charlotte, and the two children being carried on the donkey are Eustace and Alexandra. Younger sibling James is the babe in arms. These were the grandchildren of Sir John Forbes, who had been physician to the Royal Household and who was buried in Whitchurch in 1861. 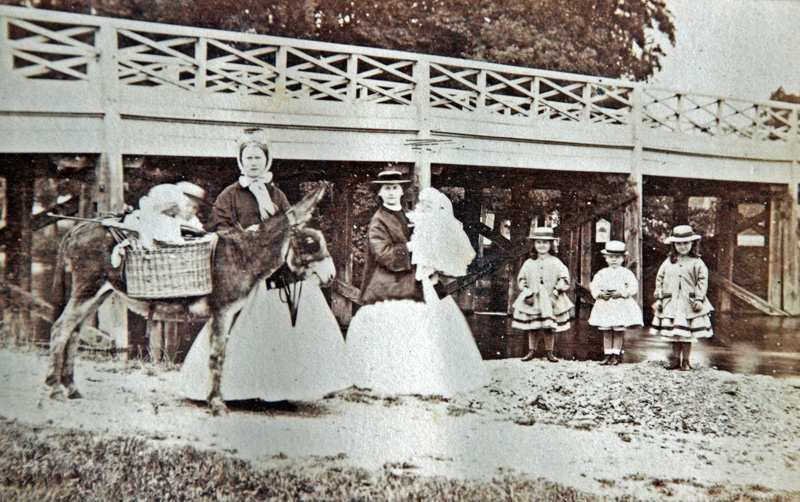