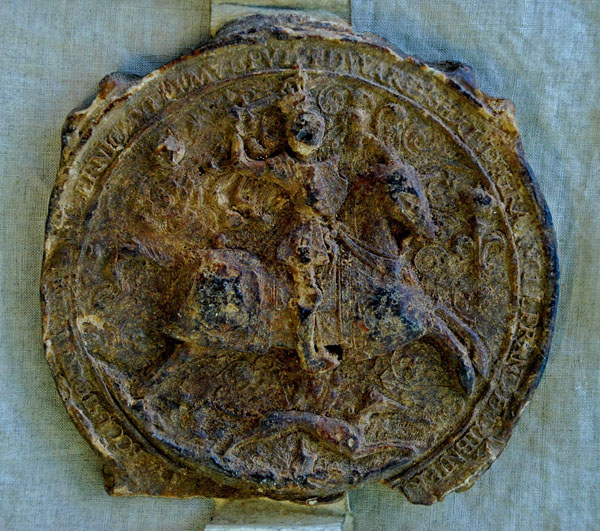 This is something we 'discovered' during reboxing at stocktake, amongst papers from the Bouverie-Pusey family.

In a bundle of deeds for manors in Charney Bassett was one that had a very large seal appended to it.  The deed in question dated from 1552, and it was a 'licence to alienate' given to the Gorfen family.  The licence allowed the Gorfen family, who had no direct heirs, to pass their title to the manors to their distant relatives, the Paulet family.

Because the manors had previously belonged to Abingdon Abbey, the Gorfens had to ask the King to give them permission to transfer the title.  Hence the seal: for this is a Great Seal.  One side shows the monarch on his or her throne, and the other typically shows them on horseback.

Now we've got a fair few Great Seals, but not one for this monarch: Edward VI, the Tudor boy King. And what a fantastically detailed Great Seal it is of the young man upon his steed, looking regal, active and powerful. Sadly not an imitation of life: for he died a year later from tuberculosis.