From Wednesday 14 until Saturday 17 November 1951, the Drill Hall in Wokingham played host to the Wokingham Industries Exhibition – a celebration and showcase of what the local factories and tradespeople produced both for the local area and globally. 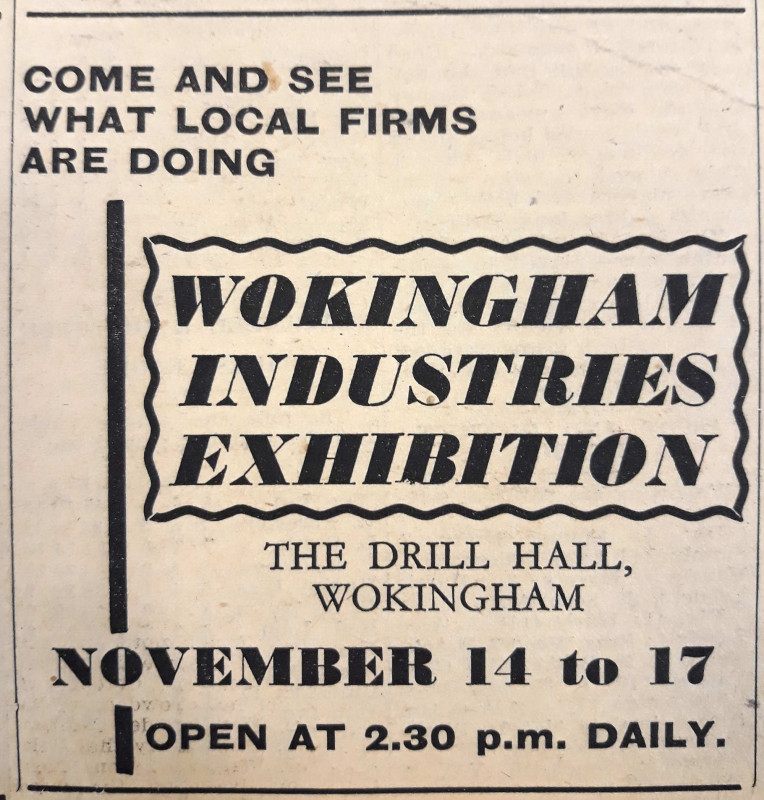 The Wokingham and Bracknell Times report a keen sense of anticipation in the build up towards the opening of the Exhibition. In their Friday November 2 1951 edition, they relay how the original plans for the exhibition were changed ‘such is the interest aroused by the project’. Whilst originally intended to run for four days until 6.30pm (with the exception of Friday, when it would remain open until 8.30pm), the decision was made to remain open until 8.30pm on all four days.

One proposal prior to the opening was for “a display of cups, medals or other trophies won by Wokingham clubs, organisations and individuals”. It seems that this was intended as a general celebration of Wokingham’s achievements. However, future issues of the paper make no mention of this display and it is unclear if the proposal was ever followed through on.

The Wokingham and Bracknell Times reported on the opening of the Exhibition in their edition on Friday 16 November 1951. It appears to have been a grand affair, with Mayor W. J. Willey performing the opening ceremony. The Exhibition certainly seems to have impressed the mayor, who prompted some amusement by referring to it as “a miniature South Bank”. He also commended it, saying that it was an exhibition for Wokingham to be proud of. 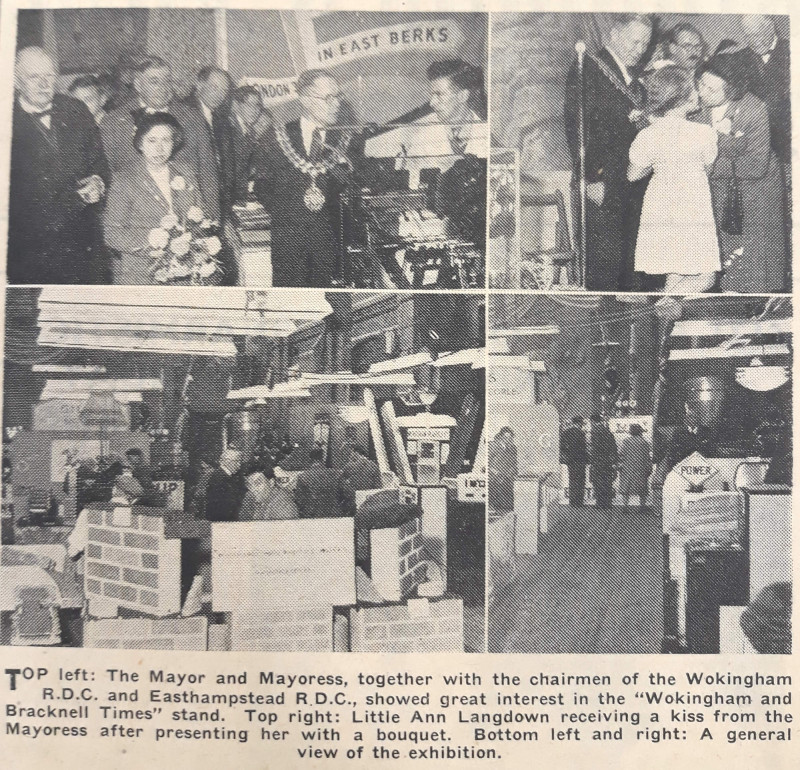 A variety of tradespeople and businesses took the opportunity to have space at the exhibition, with live demonstrations said to have attracted particular interest. The exhibitors noted by the Wokingham and Bracknell Times included White Hall Brick and Tile Works; sign writer, R.T. Giles; stone workers Messrs. W. Teakle; The Berkshire County Advertiser Ltd.; Radio Heaters Ltd.; Berks Optical Works; and Metalair. For such numerous and varied businesses to take part, the exhibition must have been an appealing prospect for advertising.

The Central Office of Information provided a mobile film unit to the exhibition to show films on productivity. These included titles such as “Key to Plenty”, “From the Ground Up” and “Ideas at Work”. These are said to have drawn attention as a lighter side of the exhibition, although may have been slightly overshadowed by an almost non-stop puppet show which “attracted big audiences”!

The 1,000th visitor to the exhibition was given special treatment. Mrs N. Luxton of Edney’s Hill and her husband were gifted with freshly welded wallets from Radio Heaters and printed notepaper and envelopes from the Times press, alongside being given a special reception by the organiser’s representatives, Mr Howard Perkins and Mr A Douglas Tanner.

The week after the exhibition, the Wokingham and Bracknell Times reported on the success of the venture. 2,444 people visited the exhibition during the four days it was open, with 567 of these being children from eight local schools. According to the Wokingham Society, the population of the town in 1951 was 11,6431, meaning that the equivalent of more than 20% of residents saw the exhibition.

The Wokingham Industries Exhibition was certainly considered with admiration by the Wokingham and Bracknell Times. They sum up the reason for their admiration well, stating that “its success is the more noteworthy since there was no recognition or sponsorship from any existing body.” This seems to imply that the Exhibition was the sole product of the people of Wokingham and therefore something for them to feel truly proud of.

A similar exhibition was held in Reading a few years later – The Trade and Industry Exhibition of 1955 (reference D/EX1263/7/38). You can find out more about this on our online catalogue.